Street food is very much ‘on trend’ at the moment, but in Turkey it’s more of a tradition than a new fad. Turks enjoy grabbing a bite on the move and the street food here is hugely varied, widely available, often great quality, and reasonably priced.

Here’s a selection of our favourite cheap eats that should come in at under 10 TL (often much cheaper). 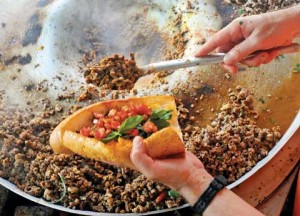 Hailing from the city of Mersin on the south coast, Tantuni is one of the tastiest kebab meats you can find (in the author’s opinion at least). It’s a ground or finely cut beef which is cooked in spices on a large hot plate. It’s spicy and succulent and served with parsley either in bread or as a durum (wrap).

So simple and yet so perfectly formed. Lahmacun is a pizza-esque base topped with a thin layer of tomato, herbs and meat. You then fill it with salad, top with lemon juice and roll it up like a wrap. At around 3 TL it’s a cheap and tasty dish although I’ve never managed to stop at one… 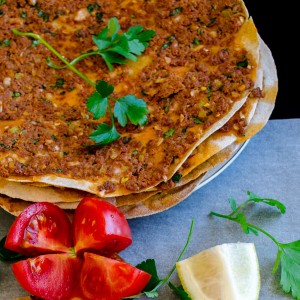 A hugely popular dish, you’ll find shops and stalls all over the place. Çiğ Köfte translates as ‘raw meatballs’ and traditionally these köfte are made by adding raw ground beef to the main base of a spicy bulgur mix. However, the use of raw meat was outlawed for retailers some time ago and now the köfte are bulgur only – so also a good option for vegetarians and vegans. It’s wise to purchase an Ayran (yoghurt drink) as these small treats pack a spicy punch!

Now bear with me, because I know the idea of grilled sheep intestines isn’t immediately appealing. However, I challenge you to spend 10 seconds standing by a Kokoreç grill and tell me your mouth isn’t watering. This succulent meat is slow cooked with an abundance of herbs. It’s served in bread that soaks up all the juices and is the perfect dish to round off a night out. 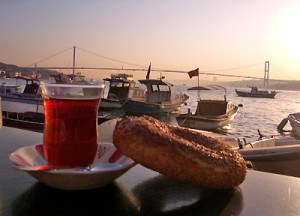 The king of all cheap eats is appropriately shaped like a gold crown. You can’t walk for more than a five minutes without seeing a Simit for sale – whether form carts or from the numerous bakeries. As a general rule, bakeries sell a softer version than carts. These mighty snacks will set you back just 1 TL, even in the most touristy areas. Pair with Ayran and you can have a pretty decent lunch for only 2 TL. And if you’re dining in a bakery they also go very well with çay (Turkish tea).

Köfte are large, grilled meatballs and are a hugely popular dish in Turkey, both at home and when eating out. You can order them as a meal, usually accompanied by rice and salad, or as a durum (wrap). But the best way to eat them is from a street cart. They are usually grilled, rather than fried, and served as a durum with salad. So grab your wrap, find a bench with a view and tuck in!

Now I know you’re probably thinking: “How could you have a list of Turkish street food without Döner?” I freely admit that there are some omissions but I had to stop somewhere or this post would be twenty pages long!

Back up
x
x
This site uses cookiesFind out more